Where has the time gone? One thing led to another, and the next I knew…the blog had been dormant for two years. Thanks to all who sent messages encouraging me to post again, and my apologies for the length of time it has taken to get back in the saddle.

What’s been happening? After my last post, in the spring of 2012, professional work more or less took over the rest of that year. As a public opinion research consultant, presidential election years are my absolute busiest time — and 2012 turned out to be even busier than usual. In addition to voter microtargeting, and analyzing survey data, I am also part of CNN’s election night decision team; we’re the ones who decide when to project a race for a particular candidate.

Then, shortly after the election, we got big news of great joy: Mrs Yeoman Farmer and I were expecting a baby. However, the pregnancy turned out to be a physically challenging one for MYF, which meant the rest of the family needed to come together in supporting her and picking up a bigger share of the farm work. The garden was scaled back, as were the numbers of livestock we were raising.

Our new baby girl was due in mid-August, but couldn’t wait to join the fun. In mid-July, more than five weeks ahead of schedule, she decided it was time to get moving. At 7am on a Monday morning, in the car driving home from the airport after a wonderful weekend trip visiting friends and family in Seattle, I got the call from MYF that her water had broken. Once back at the farm, I whisked MYF to the hospital. We spent the rest of the day there, undergoing tests and observations, until the medical team decided Baby Girl needed to come out by emergency Cesarean.

Baby Girl is doing well and thriving now, but there were numerous complications that kept her in the NICU for nearly a month. And then she needed heart surgery in October. I will write more about some of these issues in future posts — but for those interested in a general overview of what we went through, I recently had an article published which describes that roller-coaster. Thanks to the skills of some truly amazing medical professionals, and the prayers of countless people all over the world, Baby Girl is expected to live a long and very happy life.

I don’t want to dwell too much on the brutal winter we’re now finally emerging from here in the Upper Midwest. Suffice it to say that this was easily the worst winter I’ve personally experienced in my 45 years. The snow that fell before Christmas is still out in our pasture. Our hay field finally became visible again last week, as did our lawn. We expect cold winters in Michigan, but what made this one so difficult was its relentlessness. Usually, we get an arctic blast and some snow — and then a few days where the temps go above freezing, the snow melts, and it’s merely “cold” for a little while before the next storm passes through. Those periodic thaws are the stepping stones that make Midwestern winters tolerable.

This year, we didn’t get a single thaw for the entire winter. All the snow that fell…stayed. And no one knew what to do with it. We shoveled and shoveled our driveway, but soon had walls of snow high on both sides. Our church, and many big shopping centers with large parking lots, have enormous mountains of plowed snow that have now turned into stubborn icebergs. We joke that kids will still be sledding on these things in mid-May, when it’s sixty degrees out.

Today it’s in the forties, and is expected to stay above freezing all the way into next week. Our whole property is rapidly turning into a mud bog, but I’ll take that over the snow. It’s unclear when things will dry out enough to allow planting, or when the pasture will revive enough to turn the animals out on it. This year, it seems that all bets are off. So, we’re taking things one day at a time. I’m just glad we put in a larger-than-usual supply of hay. And firewood.

We had several goat kids born over the course of the winter, and are now enjoying an excellent supply of milk from the does. Surprisingly, despite the bitter cold, almost all of the kids survived. We lost a  couple of them, but for the most part were able to keep the barn buttoned up tightly enough to keep them from freezing to death. I also discovered a very useful tool for winter kidding: a blow-drier! The mother goats usually get the kids licked off to dry them, but in the dead of winter…a nice warm blast of air from a hair drier gave some much-needed assistance. Also, getting the kids thoroughly warmed up means their bodies are less stressed. It seems to have helped a lot.

But the true heralds of spring are the lambs. And our first ones were born last night! I went out to the barn a little before midnight to make my final checks, and discovered that one of our mature ewes, Conundrum, had delivered a set of twin females. Both were on their feet, but pretty wet. I tried to give an assist with the hair drier, but Conundrum objected loudly. Given that it wasn’t terribly cold last night, and that our Icelandic ewes are outstanding mothers, I decided to butt out. And, indeed, they had a good night. Both lambs were dry and dancing around this morning.

I’ll leave you with some pictures of them (note the snow shovel used to block a gap in the door — there’s a stubborn chunk of frozen dirt that’s preventing the door from sliding all the way shut): 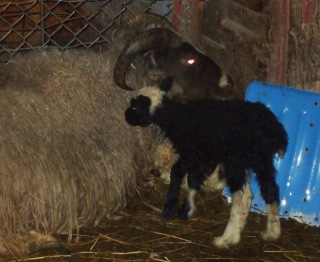 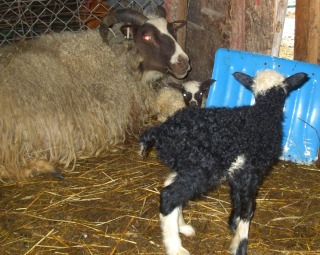 Notice the black one was even climbing all over Mom: 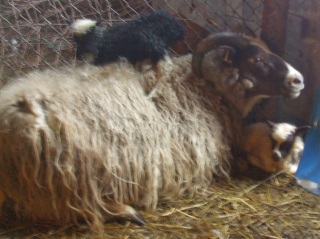 It’s good to be back and blogging again. I promise the next post will take less than two years to go up!

I’m not sure the temperature has been above freezing at all so far this month. There may have been one day when we hit a scalding 37F, but that’s been about it. We’ve had several days in the teens, and some with wind chills in the single digits (or below zero). We got quite a dumping of snow last weekend (December 12), with a driving wind to make it even more miserable. It hit us so hard and so fast, we were not able to go to Mass (or anywhere else) that Sunday. These rural roads are a pretty low priority for the County snowplows, and our 4×4 truck only holds four people. The Yeoman Farm Family judged it best to lay low and stoke the fire.

We’re still below freezing today, but the sun is shining and we’re in the upper twenties. I opened the sheep and goats’ barn doors for the first time in a long while, to let them have some fresh air and space to roam around. Their coats are plenty warm enough to be out even in much colder weather, but we keep the barn doors closed to keep their water tanks from freezing solid. The downstairs portion of the barn has just a seven foot ceiling, meaning the animal body heat can’t easily escape upwards. With the doors closed, we can keep the downstairs portion of the barn in the low thirties even on days and nights when it’s much colder outside. Only when we get stiff winds does enough cold air force its way in that the water tanks begin icing over.

We had one type of livestock which unfortunately did not fare as well during last weekend’s mini-blizzard: our bees. We got our first “starter” hive this year, and they’d established a strong colony by the fall. We didn’t remove any of their honey, choosing to let them have it all to ensure they had enough for the winter. We were looking forward to starting off the spring with a strong and vibrant colony that would split / swarm into a second hive we’d already prepared. Sadly, the blizzard literally swamped them. Wet snow drifted into the hive’s main entrance and froze into a nasty ice pack, blocking much of their air flow. Then, when the bees emerged from their smaller upper entrance hole to take cleansing flights, many seem to have gotten disoriented upon returning and finding the main entrance blocked. When I came out to check on them, I discovered dozens of dead bees littered all over the snow in front of the entrance. With their numbers (and body heat) thus decimated, it looks like the rest of the hive froze to death inside.

I feel awful about what happened, and will do a full post-mortem on what was going on inside the hive, but in many ways this is not unlike the mistakes we’ve made in getting started with other livestock. We lost our first two lambs, for example, because we weren’t ready for them and they were born in the pasture on a frigid night. The only real mistake is not learning from this kind of experience. (The rest of the lambs were all born safely, inside a building.)

One huge lesson learned about bees: next fall, I’m putting the hive(s) at least a foot or two off the ground, on pallets or cinder blocks. Another lesson learned: get some insulating foam fitted tightly around the outside of the hive before cold weather sets in. And go out there to check on the colony every day or two when it does get cold.

As for us humans, our family has been enjoying pot after pot of hearty soups and stews, made from the lamb and goat necks in our freezer. When the temperatures get and stay this cold, it’s hard to think of a nicer way to warm oneself from the inside out.

I’ll close with a lighter anecdote about the cold. If you’ve been following the NFL at all, you know that the roof of the Metrodome in Minneapolis collapsed from all the snow (same storm system that went on to hit us in Michigan and kill our bees). They haven’t been able to repair it, so tonight’s game between the Vikings and Bears will be played outdoors at the Golden Gophers’ stadium. Upon hearing this news and reflecting on it, Homeschooled Farm Boy’s face lit up in a smile. “You know what that means?” he said. “The cheerleaders will have to dress modestly!”

Yes, indeed. There are some good things about the cold.