I am a Seattle native, and currently live in rural mid-Michigan with my wife and five children. Together, we own and operate a fifteen acre farm. We raise pastured broilers, dairy goats, purebred Icelandic sheep, heritage turkeys, geese, ducks, and free range laying hens.

My primary occupation is public opinion research, and I operate my own consulting practice, Overbrook Research. What I enjoy most about public opinion research is discovering how and why people think the way they do about a particular issue or candidate – and what information they need to learn to develop a more informed opinion about that same issue or candidate. I also serve as an analyst with CNN’s decision team. Using statistical vote models, I help the network project the outcome of congressional, gubernatorial, presidential, and other contests on election night.

My educational background is in political science. I earned Bachelor’s and Master’s of Arts degrees in that field from Northwestern University in 1991, and later went back to complete a doctorate at UCLA.

As a freelance writer, my work has appeared in Ultracycling, Columbia, Our Sunday Visitor, MercatorNet, and a host of professional publications. My debut novel, Passport, won a bronze medal for best religious fiction in the Independent Publisher Book Awards. I am a member of the Catholic Writers Guild, and Passport received the CWG Seal of Approval.

My forthcoming novel, Full Cycle, tells the story of a young boy who challenges himself (and his father) to complete a 200-mile, single-day bicycle ride.

Since my early teens, long distance bicycling has been my passion. I am a member of Cascade Bicycle Club and the UltraMarathon Cycling Association (UMCA). I’ve completed over thirty double century rides, multiple triple centuries, 12-hour, and 24-hour races. I am a four-time winner of the California Triple Crown, and a sixteen-time finisher of the Seattle to Portland Bicycle Classic. 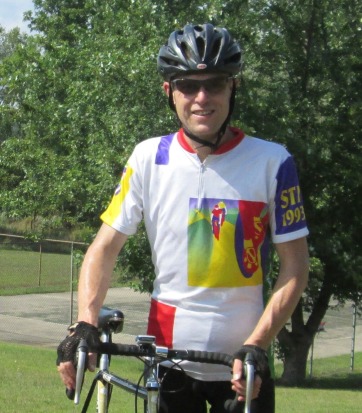