How quickly, and how completely, can life change? I got a reminder this morning, when Facebook suggested a “memory” of a post I put up five years ago today, celebrating a new personal record time (12 hours, 15 minutes) for the 200+ mile one-day Seattle to Portland bicycle ride:

I’m not sure WordPress is going to preserve the Facebook formatting, so here’s a fresh copy of the photo: 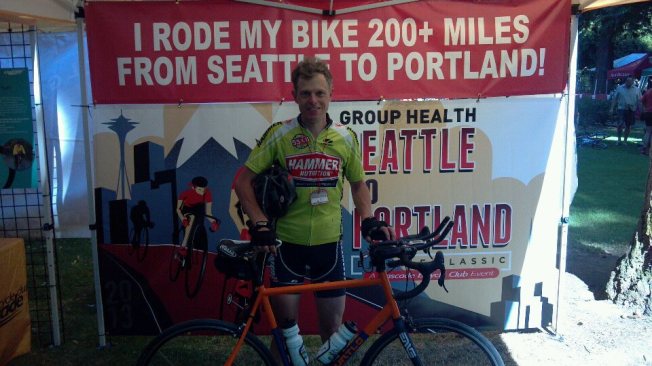 I uploaded that photo at 5:30pm Pacific time, on a Saturday. I then enjoyed a nice dinner in Portland with a colleague, caught a bus back to Seattle, and got a good night’s sleep. I met an old friend for breakfast the next morning after Mass, then enjoyed the rest of the day in Seattle before hopping an overnight flight to Michigan.

Less than 36 hours after the photo was taken, I was driving home from the airport and making what I thought was a routine “Hey, I landed safely and am in the car” call. Instead, Mrs. Yeoman Farmer surprised me with news: the baby girl in utero, not due for more than five more weeks? Yeah, well, baby girl wants out. The water just broke. Come straight home and pack a bag, because we’re going to the hospital.

The rest of the morning was a frenzy of activity, followed by a long drive to U of M hospital, followed by … lots of tests and lots of waiting, but not a lot of uterine contractions. Eventually, they decided to admit MYF to the hospital for additional observation. I went home to the other four kids, all the while on edge and waiting for an update.

A phone call jolted me awake at something like 2am. MYF explained that she was now in active labor, but the baby’s transverse position required a C-section delivery. If I wanted to be there for my daughter’s arrival, I needed to get on the road. Now.

I drove straight back to the hospital, checked in, and donned the sterile garb required to take my place in the operating room. Things seemed to be proceeding normally – but then MYF’s throat began swelling shut (due to an allergic reaction to the anesthetic being used). I sensed the entire demeanor of the delivery team change, instantaneously. Everyone buzzed with an urgency and focus that’d been absent during the deliveries of our other kids who’d arrived via surgery.

A nurse put her hand on my shoulder, and physically directed me to the door. “Dad, you need to get out of here,” she said, firmly. Bewildered, I wanted to insist I was fine and that my presence would’t be a problem – but I was already out the door before I could open my mouth.

Back in the empty prep room, I waited for what seemed an eternity before the nurse (now all smiles) returned and asked if I’d like to see my new daughter. As we walked, she assured me that the baby was safe, and that Mrs. Yeoman Farmer had come through the surgery fine as well.

A couple of gowned doctors were finishing getting the baby cleaned up and measured when we arrived. The first thing I noticed about Little Miss Sweetness was how pink she was. The second thing I noticed was how large she seemed, for having arrived so early. I also noted that her ears seemed a little small, but to my untrained eye nothing else seemed unusual.

After chatting with the medical staff for a few minutes, I asked, casually, almost as an afterthought: “Do you see any abnormalities?”

The two of them looked at each other for a moment in silence, and then the woman who seemed a bit older took charge. “So,” she explained, “We have been making all of our initial observations and evaluations. We will pass those along to the team that is coming in, and then they’ll put everything together with their own observations.”

Or something like that. Five years later, the exact words are a bit hazy. I do remember thinking that I’d been around politics to know a “dodge” when I heard one. I also remember the doctor’s smile being so confident, I quickly assured myself everything would be alright. After all, Baby Girl sure didn’t look to me like she had any problems.

Is this a textbook example of normalcy bias? Maybe. But maybe I needed a few more hours of blessed normalcy.

Everything, of course, was not alright. That afternoon, we got the twin bombshells that Little Miss Sweetness was showing several markers for Trisomy 21 (Down syndrome), later confirmed by additional tests, and that she had multiple holes in her heart that would require major surgery to repair. By the next afternoon, we learned that she also had duodenal atresia (a blockage between her stomach and intestines), which would require surgery the next morning to correct.

Longtime readers will remember an article I published when Little Miss Sweetness was eight months old, detailing the crazy events which followed. What I’ve been thinking about today, however, is being in the NICU on the Saturday after the birth. As I watched LMS sleeping, with all the tubes and monitors hooked up to her little body, I suddenly felt overwhelmed by how much our lives had been turned upside down in just one week.

Exactly one week earlier, I’d been celebrating the ride of my life. Everything had been perfect. And moreover, I’d been in complete control. Now, in what seemed the blink of an eye, it’d all been flipped over – and I was in control of none of it. The guy standing triumphantly at the finish line in Portland? That seemed like it’d happened decades earlier, and to a different person.

Does that Facebook memory really say “Five Years Ago”? It feels like it’s gone by in a instant. Today, Little Miss Sweetness is a happy and healthy young lady – and none of us can imagine life without her. Are there still challenges? Absolutely. But also tremendous joys, which are inseparable from those challenges.

Little Miss Sweetness has taken us to a world we never saw coming. And sometimes, those turn out to be the very best kind.