We’re getting to that time of year when everything is shutting down. The pasture is basically gone, so we’re no longer bothering to take the goats out during the day to graze. That means they’re confined to a fenced area near their part of the barn, with access to the barn itself if they prefer to be inside. With the weather getting increasingly gray and cold, I don’t blame them for wanting to stay in.

However, they still need to eat. The milkers get a good ration of grain twice a day, and we feed some hay to the whole herd at the beginning and end of the day (at the same times we bring hay down for the sheep). The middle of the day is the problem. Our hay supply is limited, especially so this year because we didn’t get more than one cutting (a confluence of a couple of problems, including weather and being overdue for more fertilizer). We did buy quite a few bales from other farmers, so if we’re vigilant we should have enough to make it through the winter. There just isn’t a lot of extra.

Although the hay didn’t get long enough for an additional cutting, there is some good growth out there. I’d love to be able to turn the animals loose to graze it, but the hay field isn’t fenced. They’d be in our neighbor’s yard (and then all over the county) in the blink of an eye. And yet I hate to see all that nice grass go to waste. If we leave it, it’ll just die back over the winter and be lost.

Our solution: since we can’t take the goats to the hay field … we’ll take the hay field to the goats! Our push mower has a detachable grass catcher, which is the primary tool we need. (I wish we had one of those giant bagger attachments we could attach to our lawn tractor, but we don’t. So, it’s the push mower or nothing.) Some of the older kids and I take turns running it up and down the hay field, stopping every so often to empty the grass catcher into a wheelbarrow. Once the wheelbarrow is full, we leave the mower out in the field and run the wheelbarrow over to the fence of the goat area.

What’s funny is that we’ve been doing this for so many days now, the goats have learned that when the mower fires up … they get fed! They tend to hang out inside the barn most of the time. Then, once I get the mower running, they come stampeding out. By the time I fill the wheelbarrow and reach their feeder, they’re impatiently wondering what’s been taking me so long. As soon as I begin stuffing handfuls of grass clippings into their feeder, they’re literally climbing all over each other to get it. 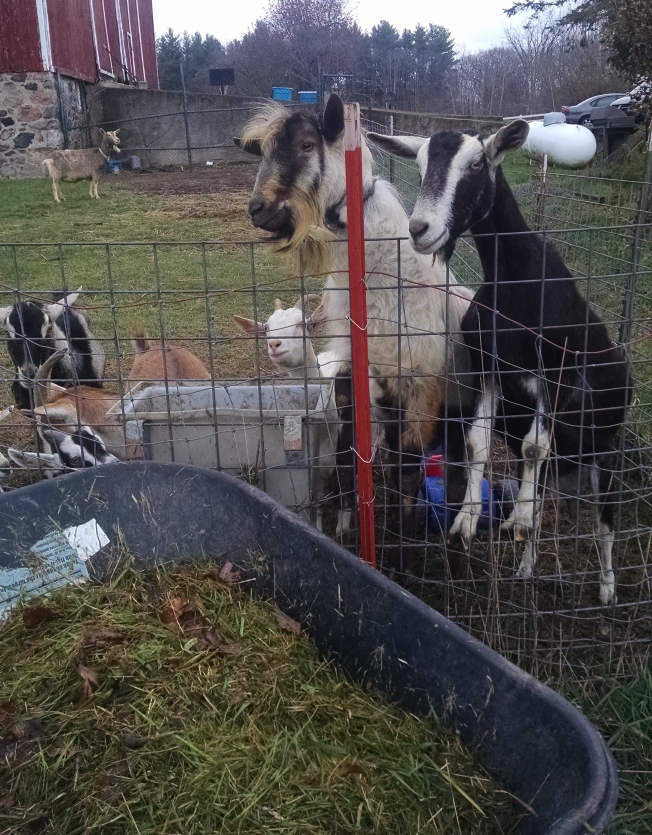 We fill the feeder a couple of times, and leave the rest in the wheelbarrow. There’s usually enough left for another feeding, which we try to give them about an hour later. Then it’s off to cut some more grass.

With the kids taking turns with me, it’s not too much of a burden. And for me, it’s a nice break from the work I do in my office. It gets me out and moving in the fresh air, which usually helps clear my head nicely before returning to work. The only days we don’t run the mower is when it’s raining or snowing steadily. Then, it’s back to stored hay.

We’ve had a good string of days lately where we’ve been able to cut. Hopefully we’ll get plenty more before the dead of winter arrives next month.