A few days ago, we made the decision to put Mother Duck and her surviving ducklings in a garden pen. One week ago today, she’d hatched ten little ones. They all did fine the first couple of days, but then began disappearing. As much fun as it had been, watching the little duck family free-range all over the property, we didn’t want her to lose any more of her brood.

Wednesday afternoon, I got one of the pens cleared out; we turned the pullet chicks loose, and consolidated the Cornish Cross meat chickens into our other pen. Next came the challenge of actually catching Mother Duck.

I began looking for her, and immediately got confirmation of my decision to move them to a pen. Four of her ducklings were happily swimming in  a puddle behind the barn, completely unsupervised. Mother Duck was about 50 feet away, with her other three ducklings, honking and quacking for the four missing ones. She seems to have walked off from the puddle, followed by three, and hadn’t realized that the other four had ignored her. And, naturally, the four were continuing to ignore her. (Wouldn’t you, if you were having a grand old time swimming?)

The four swimmers were easiest to catch, so we put them in the pen first. One of the Yeoman Farm Children then helped me catch Mother Duck. That was quite difficult, because she’s a fast runner. Eventually we tired her out, and were were helped by her wanting to stay fairly close to her other three ducklings (one reason we didn’t put those three in the pen right away).

I carried Mother Duck to the pen, and Helper Kid carried the three ducklings. The transfer to the pen went smoothly. I made sure she had plenty of water and high-protein feed, and that the pen was secure. 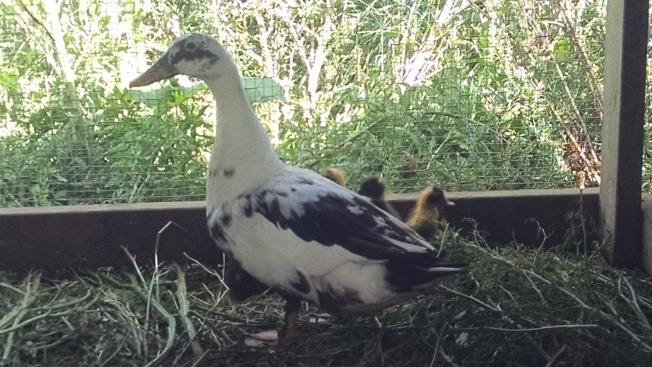 One of the seven ducklings did end up dying; we’re not sure what the cause was, but one morning when I came out for chores, it was simply laying dead in the pen. But that happens; baby birds are fragile. The other six have been thriving. Mother Duck isn’t thrilled about being confined, but I know this is the right move. She’s taking really good care of the six, brooding and keeping them warm at night. We’re able to get good feed into them. And none of them is getting lost in the high weeds.