In late June, we had a mother duck hatch out eight ducklings. Cute as it was, watching them waddle around the property, we’ve never had much long-term success with ducks brooding their ducklings free range. (Chickens, on the other hand, have tended to do an excellent job.) The mother duck tends to get moving too fast, and tends to plow her way into weeds which are too high for the little hatchlings. The little ones get lost, or picked off by barn cats, and the next thing you know … no ducklings are to be found.

So, Mother Duck and her little ones basically spent the month of July in a 4 x 8 portable pen in the garden. They had a grand old time, eating weeds and bugs. We also gave them some high protein supplemental feed, so they grew quickly.

Last week, I decided they’d had enough time to mature and bond with Mother Duck and each other — and they were certainly big enough and strong enough to keep up with Mother Duck wherever she might lead. They had pretty much fully feathered out, and there was no reason for them to remain confined. Besides, we needed the pen for a batch of Cornish Cross meat chicks. It was time for the duck family to go free range.

A couple of the Yeoman Farm Children helped me catch the ducklings and mother duck; even in such a confined area, ducks are so hyperactive and high-strung, they can be difficult to grab. We eventually managed to do it. I handed the ducks over the garden fence to one of the kids, who turned them loose in the area right behind the barn.

Mother Duck promptly bolted for the sheep pasture, with a duckling or two behind her. The other six ducklings took off in four different directions, all squawking and quacking as they did so. The kids and I managed to track down a few of them, but the others worked their way into the garden and into some very thick weeds. When I tried to reunite the newly-found ducklings with Mother Duck, I couldn’t find her. She’d already vanished into a crowd of other ducks in the pasture.

A handful of other ducklings had congregated near the barn. Still incredibly high-strung, they nervously ran away as I approached carrying their stray hatch-mates. I set the other ducklings down, nudging them toward the larger group. They somehow connected, and then squawked together while looking very frightened.

I decided the best thing for me to do would be to walk away, let them calm down, and let the situation sort itself out. That proved wise. When I returned to the barn that evening, Mother Duck was back — and surrounded by a pack of seven ducklings. They were all as high-strung as ever, but together. I worried about the eighth duckling, and wondered if it was still lost in the weeds somewhere.

The answer wasn’t long in coming. Listening carefully, I could hear the distinctive squawking of a young bird in distress. Ducklings and chicks have unmistakable ways of calling for their lost mothers. This one was clearly coming from the high weeds in the garden, and I figured I had just enough daylight remaining to find it.

It wasn’t hard to home in on the sound — but as soon as I approached, the crazy duckling took off deeper into the weeds. The harder I tried to catch it, the more desperately it tried to stay away. I must’ve chased the thing around for 15 minutes before finally pouncing on it when it stopped to rest. I carried it triumphantly to the barn, the duckling squawking in protest the whole way. I eventually found Mother Duck, but she and the rest of the brood began running away when they spotted me. So, I gently tossed the eighth duckling in their direction; a moment later, the entire brood was again together.

The next morning, Mother Duck and all eight of the ducklings were still together — and they’ve remained so ever since. All day long, they forage across the barnyard. Every night, they pile up for sleep in the barn. Each morning, when I come out to tend the sheep, Mother Duck and her brood are there to greet me. 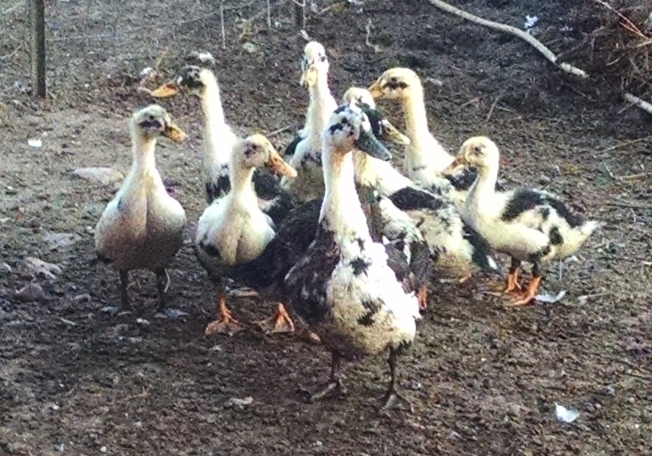 It doesn’t get much more ducky than that.